This is the quintessential accessory dwelling. Often called a back yard cottage, a guest house, or a casita. These are free standing structures that sit in your back yard. Depending on the size of your property, and your local zoning restrictions, they can be small or have multiple bedrooms. New ones are rare in San Francisco, but they are common in Berkeley, Oakland, and other Bay Area jurisdictions.

In Berkeley and Oakland, they are limited to no more than 14 feet tall (no second floors, no lofts). Both cities allow a free standing ADU to be only 4 feet from the side and rear property lines.

Many older properties have existing free-standing garages. These can often be converted into accessory dwellings. The rules governing such a conversion will vary from jurisdiction to jurisdiction.

Also, because garages are considered a storage occupancy, in California at least, you will be required to bring the existing structure into compliance with the current structural code. Depending on the age and condition of your garage, this could be a significant cost.

Most cities will allow you to add on to your existing house and make the addition the accessory dwelling. In every jurisdiction that I’ve worked in, an addition to the existing house has to comply with the required set-backs (the distance from the property line that is allowed by the local zoning code).

Many houses were built before the current codes came into affect. In some jurisdictions, the addition can follow the line of an existing wall, even if the wall is too close to the property line. In most jurisdictions, however, the new addition must meet the current set-back requirements.

If your San Francisco house still has a full garage, running from the front of the house to the back of the house, you can usually build a small 1 bedroom apartment that faces the back yard. San Francisco only allows very minor additions to houses (filling in under bay windows, and similarly small additions); generally the new unit has to be entirely within the existing envelope of the building.

Legalizing an existing secondary unit that was built without permits

Many San Francisco houses have existing in-law units that were built without permits. These can be legalized under the City’s legalization program, but you are required to bring the in-law unit into compliance with the current building code which can be quite expensive in some cases. The City will also make you comply with a handful of Planning requirements that will add to the cost.

Currently, if your illegal in-law unit meets the requirements to be included in the San Francisco program, the plan check fees are waived. If you have received a Notice of Violation/Abatement from the City of San Francisco because of your illegal in-law unit, if you legalize the unit in their program, not only are the plan check fees waived, but the penalty fine is waived. This is no small matter as the fine is 9x the cost of the building permit (often around $50,000).

If you have a large single family home, you can consider splitting it into two dwellings, one larger than the other.

The reason one has to be larger than the other, and their may be a maximum square footage for the accessory dwelling’s size or a specific ratio between the two unit sizes to meet, is that accessory dwellings cannot compete with the main dwelling. They are intended to be accessory to the zoned use of the property which, in most cases is being a single family home. Converting a single family home into a duplex – two more or less equally sized dwellings – is normally not permitted unless your jurisdiction allows duplex apartments in your neighborhood. 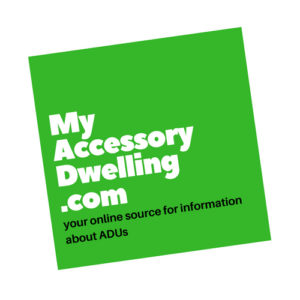 MyAccessoryDwelling.com is your online source for information about accessory dwellings.

Get your ADU Fact Sheet, a 4 page report full of useful information about the potential and challenges with accessory dwellings, at no cost to you. Just fill out the form below to receive the ADU Fact Sheet: